via Athens and Porto Rafti

Corinth to Nablus
Taxi ride via the Corinth canal to the station. A canal was proposed as early as 7BC the idea was abandoned in favour of a portage road, the Diolkos, where the boats were hauled overland for about 8Km. The Romans then had ago but it wasn’t finished until 1881 https://en.wikipedia.org/wiki/Corinth_Canal. 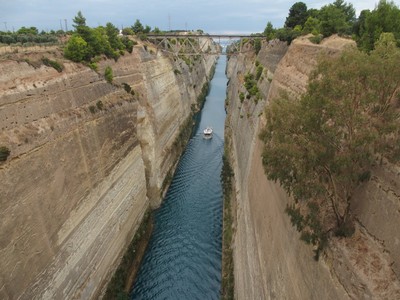 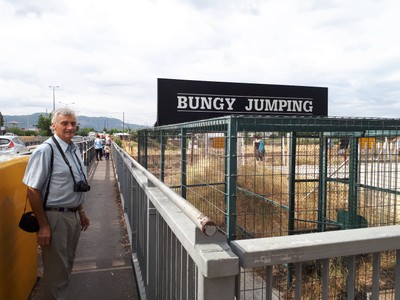 The train took us to Athens airport and a taxi transfer to the hotel. We were planning a swim in the sea but it was far too windy. The journey’s entertainment was trying to organise a rendezvous with Clare a friend of Val’s from school days , who just happened to be sailing in the area. They had been moored in the bay a few days before but we missed each other by a whisker and it was too windy for them to “retrace their tacks”! 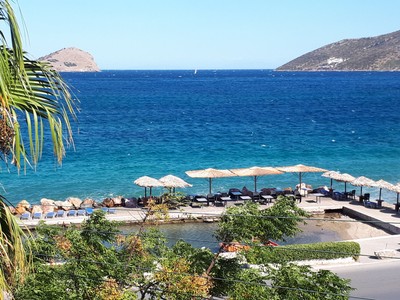 The next morning we flew out of Athens and arrived in Tel Aviv by 9:30. Superfast entry to Israel with no questions asked. We took the Sherut ( shared taxi in Hebrew, it is a minibus and does not operate to a timetable, leaving when all seats are taken) to The Damascus gate in Jerusalem. A quick stop for refreshment and for Val to change into more modest clothing ( you know how immodest I usually am!) and we were in the queue ( crush! ) for the bus (18) to Ramallah, actually we joined 3 crushes before getting a seat but we were lucky as we managed a seat on an air conditioned coach.

We passed the familiar sites and it felt good to be there; Garden Tomb, St Georges Cathedral, 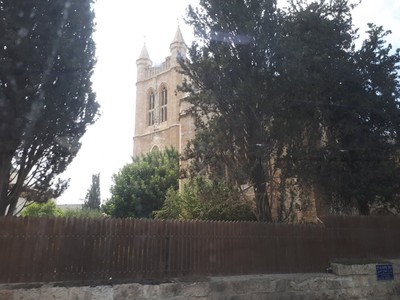 American Colony, Hellen Keller school for the blind. Soon were at the checkpoint, no searches for us but the delays to traffic are huge ,its chaotic. 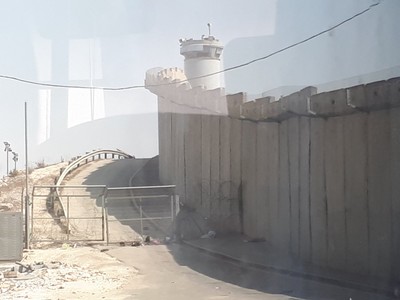 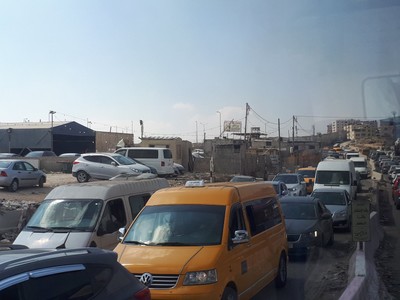 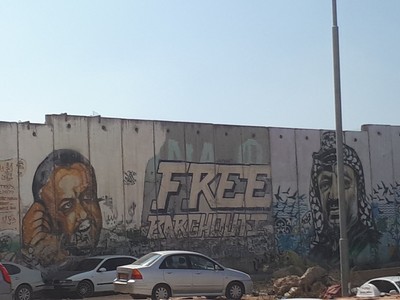 A change of bus in Ramallah and onto Nablus. A windy road through the Olive clad mountains, 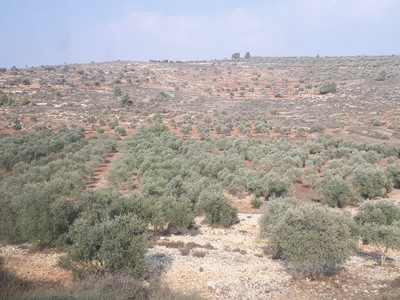 a glimpse of some shepherds ( by chance this photo snap shows him praying, I think). 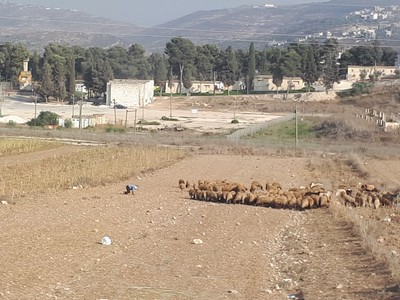 The illegal settlements have become more established since I was here in 2014 and the road closures are having a huge impact on the ability of the locals to travel from city to city within the West Bank. 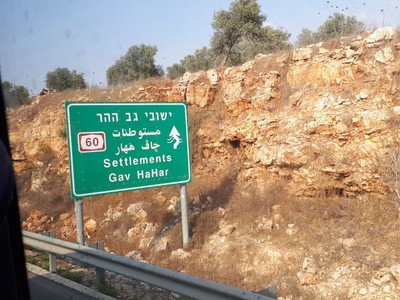 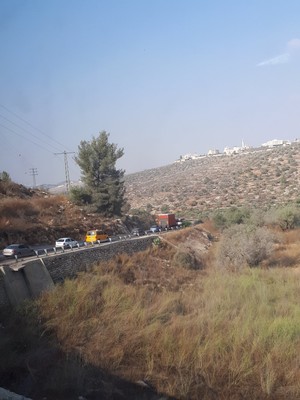 Roads are closed to Palestinians allowing the settlers to travel with ease, so our journey of 41 miles took us just over 4 hours. Our journey of 33 miles from the airport to Jerusalem (Israel not Palestinian territory) was approximately 40 mins.
Alighting from the bus we were immediately welcomed by a passing local who ensured we knew the way to our guest house, a short walk int the Old City, past the Kanafeh shop and the soap factory and we arrived at the lovely Soufan Guest House. https://www.booking.com/hotel/ps/soufan-guest-house.html 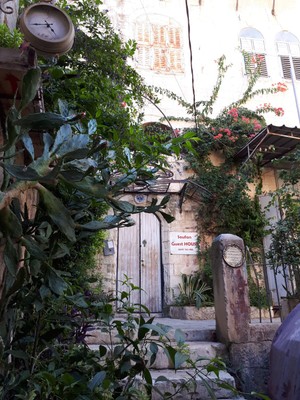 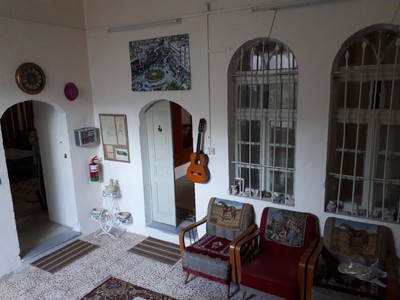 Bari and Ferry to Greece

We spent a happy day swimming in the sea, eating drinking and reading on the beach. Its the end of the main tourist season in Italy but still in the high 20's, so fine for us Brits! 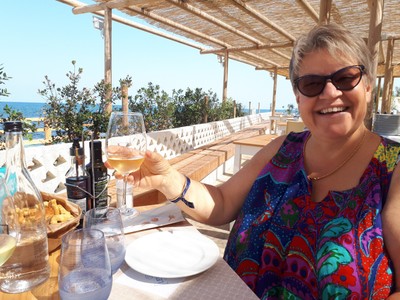 The next day we donned the rucksacks ( in a thunderstorm!) and took the bus to the ferry terminal. We used left luggage again and set off to explore the old City of Bari with its winding narrow streets, old churches and a Basilica , hand made pasta drying outside the houses, ancient port and fishing boats. A delightful place to stroll. It is rather a maze of streets and alleys, my watch told me that in the old city we had we walked 9.5 km! 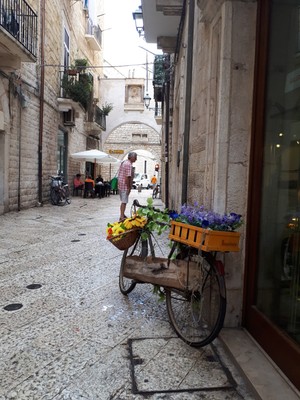 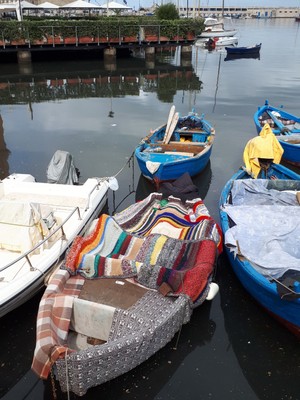 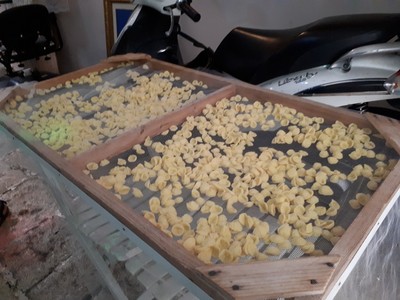 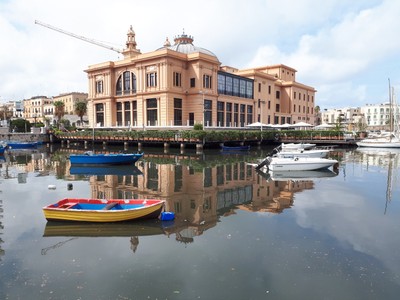 Then back to the ferry terminal to collect the luggage and board the boat, only we had left the luggage at the wrong terminal, meaning another walk adding to the kms walked in the old town. We weren't the only ones who made that mistake so we walked in a crowd of mainly "20 something" backpackers with incredibly long legs! 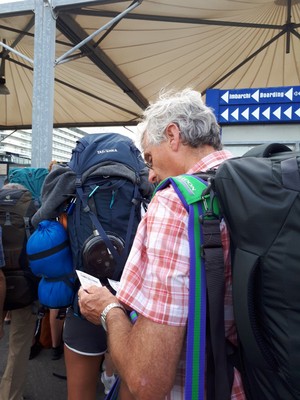 The boat journey of about 18 hours was calm and restful. The ferry was busy with quite a few people sleeping on the decks or in the lounge, (we had booked a cabin) and a large party of Russian Orthodox tourists and priests. Turns out that the cathedral in Bari, San Nikolas, is an important place of pilgrimage for the Russian Orthodox and that the budget route is via Corfu. Our boat stopped at Corfu at 4 am, I didn't leave my bunk to look for the Durrells, but when we awoke the ferry had half emptied and so we were able to enjoy a very peaceful sail to Patras. 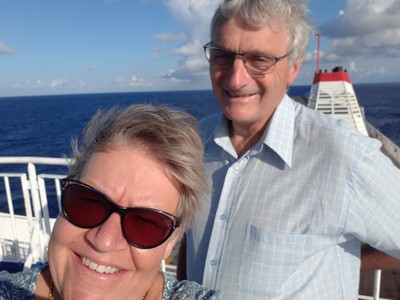 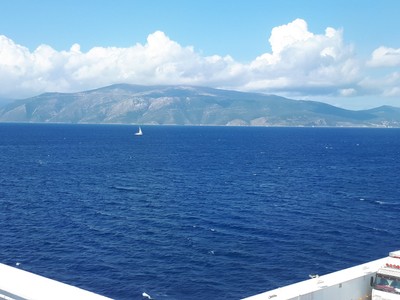 Fending off the awaiting taxi drivers we took the bus from the port, right outside the terminal, to the central bus station (1 Euro). All very civilised! 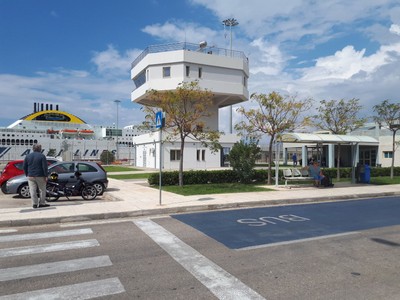 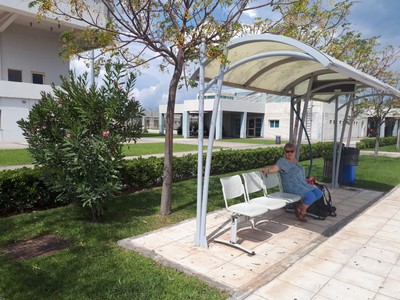 One of our fellow travellers had also taken the train from London, but without breaking her journey. She was arriving in Greece on Friday morning having left London on Wednesday afternoon.

The bus station was heaving, certainly not like in above photo, but we found an English speaker at the information desk, who redirected us to the train station, where eventually, with some haggling and smiling, we secured seats on the next bus that was operating as a rail replacement! That is complicated enough in the UK in English let alone in Patras in Greek! 1.5 hours later we were at Kiato station and on the train to Corinth. By 5:30 we were walking in the footsteps of Paul in ancient Corinth. 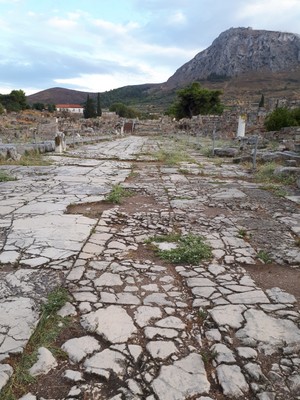 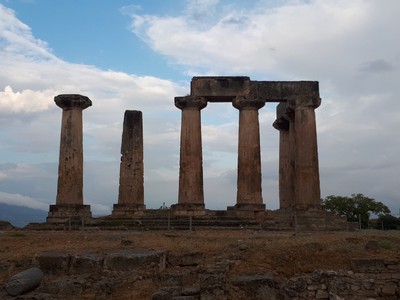 This is one of the places that Paul was hauled in front of the authorities. As the sun set over this ancient site I considered how brave Paul had been. He was not afraid to speak his opinion and stand out from the crowd. Not quite the same, but this is a day when young people all over the world are taking action on climate change. Challenging the status quo...