Jericho and Bethlehem and onto Jerusalem

The Walled off Hotel

We had intended to get the shared minibus ( Service) to Jericho but Deema’s brother knew a taxi driver who did us a good deal so we had nearly door to door A/c transport as we dropped through the desert a few hundred metres below seal level. I say nearly door to door as his taxi was new and unscratched so he did not want to bring it into the narrow streets of the Old City.
Jericho is close to the Dead sea ( although the Dead sea is retreating at quite an alarming rate0, and 233 metres below sea level. It has a natural spring and so is quite fertile and famous for its harvest of dates. 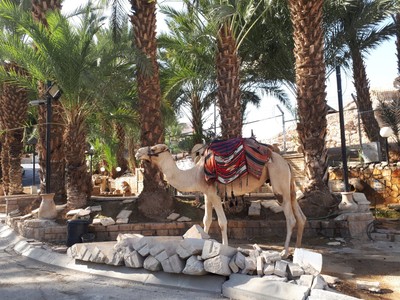 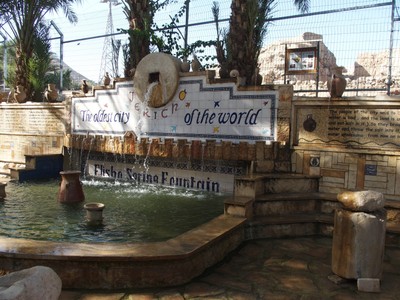 As we sat outside in the evening we could hear the dates falling from the trees!
There is a cable car up to the Mount of Temptation and St George’s Monastery. At the top you are still below sea level, most strange! It was 36 celsius and there seem to be hundreds of steps to the monastery. If this is the mountain where Jesus spent 40 days and nights no wonder his thoughts were sending him to despair ( is that a good way to describe temptation?). 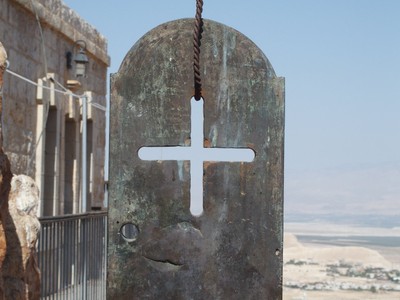 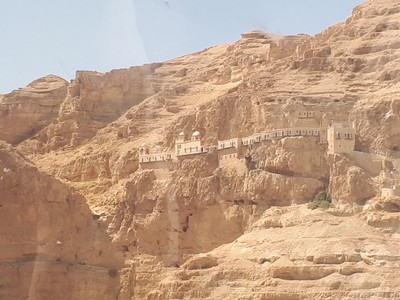 We also visited the ancient walls of Jericho, there were various ages of historic ruins and I am not sure if they have really exposed the ones from Joshua’s battle of Jericho. Nevertheless as you stand in the searing heat and look across the River Jordon to the Jordanian hills it makes the Old Testament stories come to life and you can imagine a little more of their context.
Our Hotel (loose sense of the word) was out of the town and boasted itself a farm stay—2 mangy camels and one poor horse in a tinned roof pen. However it Had a small pool which seemed very clean and we had this to ourselves. I think this is most unusual in the West Bank, but it was most welcome.
The next day we travelled to Bethlehem via Bethany. Past the ridiculous signs warning people that they are putting themselves in danger of death by entering the towns. 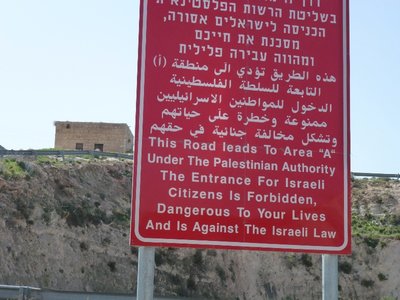 We arrived at the bus station in Bethlehem just below manger Square where hundreds of tourists were being herded to the Church of the Nativity. This however was not our destination (we have been before and it did absolutely nothing to remind me of the birth of Jesus) we were headed to the Walled Off Hotel. Sometimes known as the Banksy Hotel. This was an absolute highlight of our trip, every original and quirky detail. We were living in a work of art! Banksy has done so much for the Palestinian people, all those we met in Bethlehem were so proud of the hotel. This video explains it better than me. Its 12 minutes long but worth a watch https://youtu.be/CMS6Ds3qryY
We took a walking tour along sections of the wall and to the Aida refugee camp. 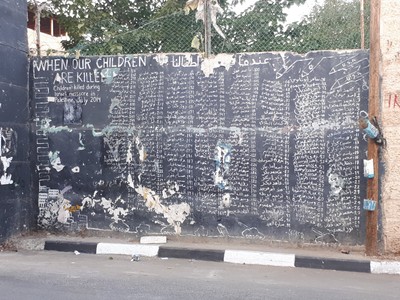 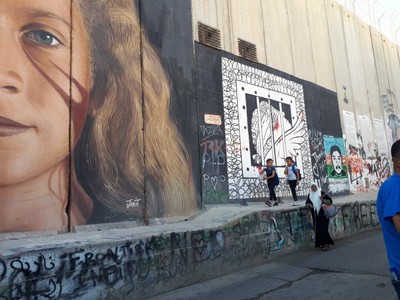 Good to hear and see some of the projects that are encouraging local enterprise, I was particularly impressed by a new recycled clothing range using older Palestinian garments, with intricate embroidery and weaving, and upcycling them into designer clothing. Good job I had no extra room in my rucksack!
We had the most comfortable night’s sleep of the holiday, it was strange sleeping under/ in a work of art! Also, I have never kept a hotel room so tidy, it felt all wrong to leave things strewn around! 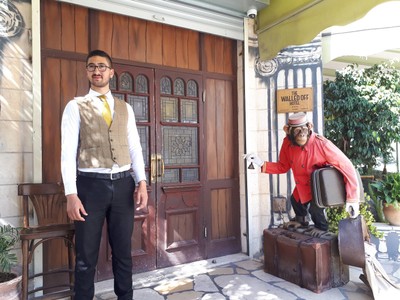 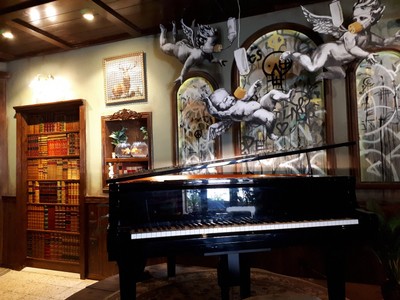 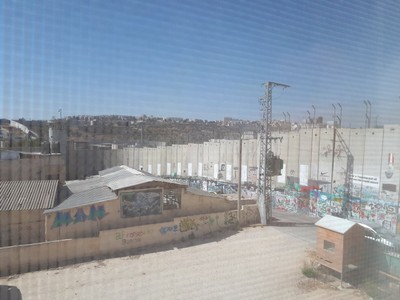 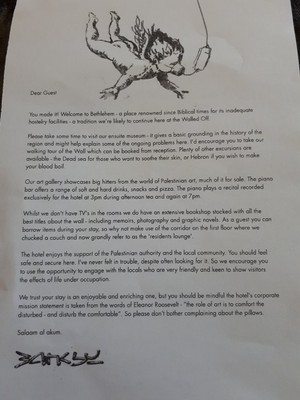 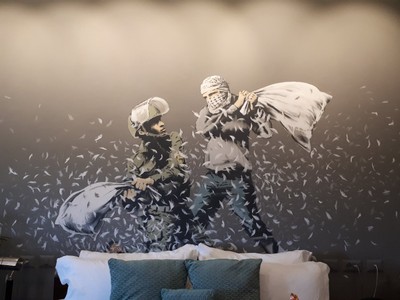 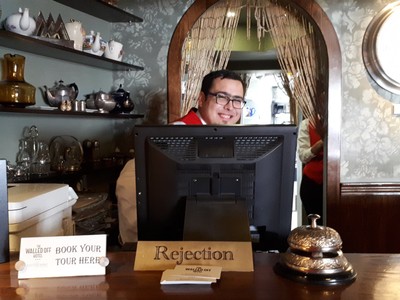 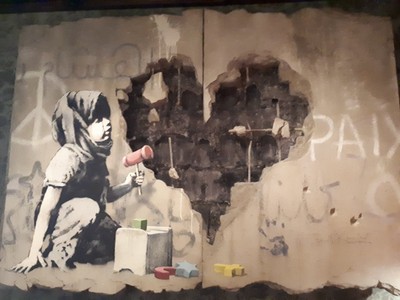 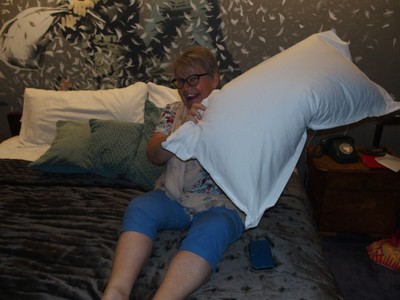 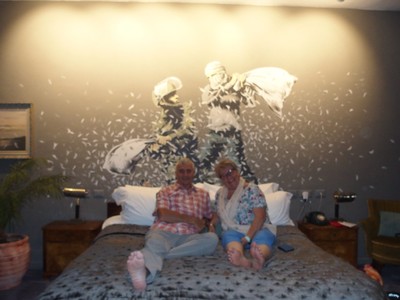 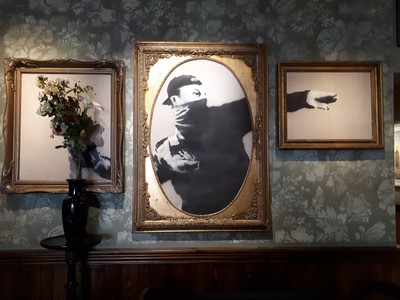 And here is a little video of the secret door!
https://youtu.be/JdQP9gLU87g

The next day we walked to Manger Square and bought some replacement Hebron Glass wineglasses and then to the DHL office and the bus to Jerusalem. A 6 mile journey that, with checkpoints, takes a good hour. Because we are old (I think over 60 is the cut off) and probably because we have a British Passport we can stay on the bus at the checkpoint. Most of the Palestinians have to exit the bus and wait in line, no shelter from the sun. The armed soldiers check the papers of those on the bus and then the waiting queue before they are allowed back on. Process took about 20 – 30 mins but it was not a busy day. Its quite unnerving having soldiers with machine guns and wearing flak jackets, helmets etc making their way up the bus.
It was the sabbath in Jerusalem so not very busy. We did not wander too far from the Jerusalem Hotel
which is very close to the Garden Tomb. The next morning we took the shuttle to the airport. We had a short tour of some of the narrow suburbs near the Yehuda Market which interested me as this was where my parents lived in the 80’s when I visited with 2 small children. The tour was because the driver stopped first to buy flowers, then again to pick up passengers raid a bin and cut a coke bottle in half. He then drove through some extremely narrow streets to deliver said flowers beautifully displayed in old coke bottle! Whether he had a guilty secret or perhaps it was to mark the start of the Jewish New year Rosh Hashanah?
We arrived in time for our wonderful Ryan Air flight to Sofia. Tel Aviv airport was, as ever, thorough and efficient!
Our flights this holiday have amounted to 0.88 tonnes of Carbon (between 2 people). I believe we should be aiming at no more than 3 tonnes per year per person.

Posted by Valfowles 15:47 Archived in Israel